At the end of the day, the goals are simple: safety and security – Jodi Rell

We live in an increasingly complicated and complex world governed by systems of jurisprudence and order that are designed to level the playing field and make all of us equal in the eyes of the law.

In theory, the checks and balances that we’ve put in place to ensure our liberty and safety always make sure that the fine line they were created to protect is always maintained.

But in practice, that line is one that too many individuals abuse and cross far too often.

While the vast majority of us are willing to abide by whatever conditions are impressed on us to ensure the continuance of the life that we love, there are some who see those regulations as being merely a hindrance to their own prosperity.

It’s that tiny percentage of the population that most of us are wary about and we want to make sure that our families and loved ones are protected from that element of society.

While the police do an incredible job, they can’t always be there to ensure our safety, and sometimes we need to step up to the plate and secure our homes and the safety of those living in them.

And the most efficient and effective way we can do that is by installing a PoE (power over ethernet) security camera system to help to safeguard and protect our properties.

That’s why we’ve found five of the best PoE camera systems that are available for the American home, and small business owner, so that you can armor your property and defend your family against anyone who might be intending to harm either.

So come with us and together, we’ll make you and yours a little more secure… 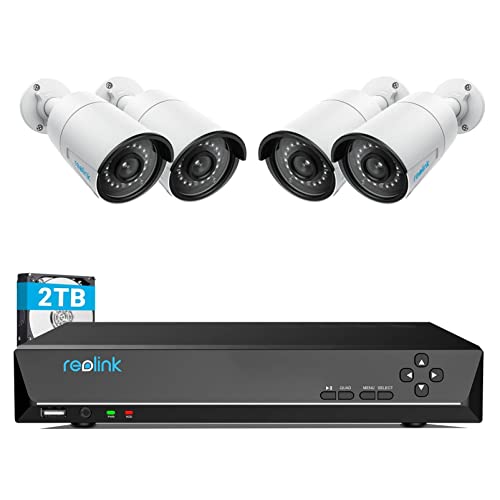 Reolink is, in their own words., devoted to creating the finest home and small business security products.

They’ve spent years searching for, and researching, ways to ensure that both are comfortable and secure, and while they’ve only been a fixture on the home security scene for the last decade, in that time they’ve become industry leaders in their chosen field.

It might not have the snappiest name, but the RLK8-410B4 is what Reolink refer to as one of their plug and play surveillance camera systems, primarily because it’s so easy to install and use.

As long as you can do a little DIY, or know someone who can, you can fit the camera’s, that come with two hundred and seventy feet of cable, which you then plug into the NVR (network video recorder), which in turn comes with a two terabyte hard drive and can record up to eight separate channels at once.

Motion triggered, the RLK8 uses Super HD and Vivid Night Vision, which has a range of up to one hundred feet, to record anything that crosses its path.

And, you can program this system to automatically overwrite old files and create new ones so that it will never run out of hard drive space. Plug it in, and it’s ready to go. 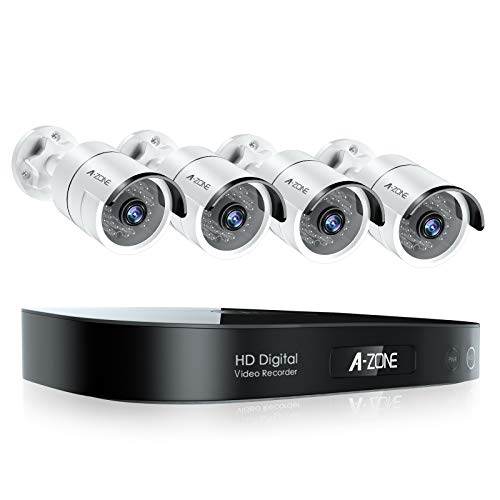 A-Zone boasts that their PoE camera system allows you to protect your home, garden, and small business anytime and from anywhere.

And, we’re forced to concede the fact that they may have a point, as this camera system has an impressive array of tricks up its sleeve that it uses to protect your property.

Completely weatherproof, this eight-channel capable PoE camera system stores up to a month of high definition footage, and is just as effective at capturing the faces of any unwanted visitors at night as it is at recording them during the day.

With an effective range of up to sixty-six feet, nothing and no-one will escape the glare of this motion-sensitive system when it turns its eye on them.

Easy to install, and even simpler to use, the A-Zone will also stream the real-time footage that its camera’s capture to multiple smart, and internet-ready devices, wherever they are in the world.

Distance is no object, and with the A-Zone PoE security camera, you’ll be able to find out just who is snooping your home, even if you’re in a different time zone. 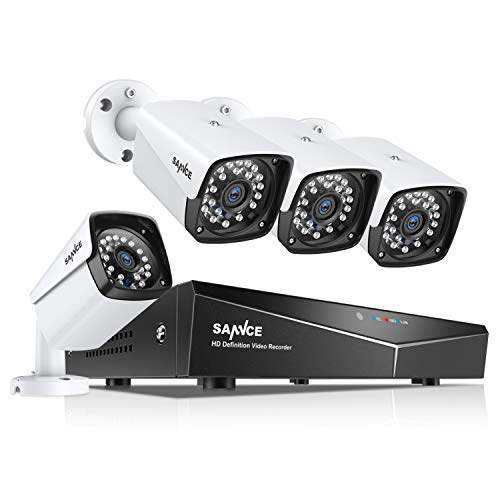 Sannce lives by a simple philosophy, protect all that matters and they make that happen by providing assured safety at an affordable price.

That’s a bold statement to make, so luckily Sannce has a PoE system that’s more than capable of backing their philosophy up and keeping your home and business safe and secure.

Powered by a single ethernet cable, that also transmits the video signal to the Sannce’s NVR, which will record all of the footage that you’ll ever need, or want it to, this PoE system was designed to let nothing or no-one evade its cameras.

It’ll also stream in real-time to any of your smart devices, and the Sannce app will allow you to fully control the system, regardless of where you are in the world.

Able to capture high definition footage, in the day and at night, at up to one hundred feet, the Sannce is a motion-activated PoE camera system that has a party trick that no trespasser or would-be intruder will ever see coming.

If for any reason, any of its cameras are blocked or their lenses are obscured after they’ve been activated, it’ll immediately alert you via email, which means you’ll be able to take swift and decisive action. Nobody escapes the stare of the Sannce. 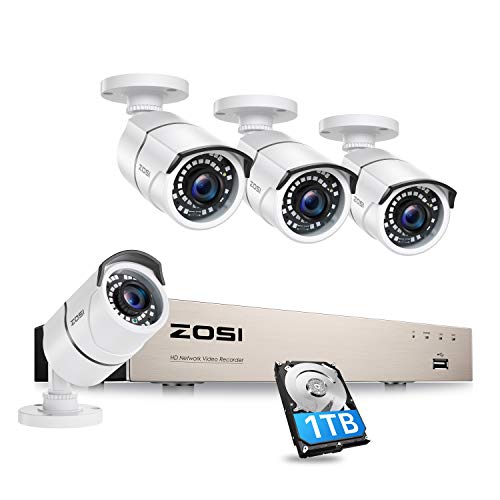 Security made easy is the credo that Zosi lives by and all of their camera and home security systems are designed to be installed by their users.

They don’t make anything complicated, they just want to make sure that your home and your business are safe and that you’re fully in control at every stage of your PoE journey.

It’s one terabyte hard drive that allows you to record as much footage as this single ethernet cable that’s used to power the cameras and transmit their footage, system will film.

And the three hundred-foot cable that it comes with means that, once it’s installed, you’ll be able to locate the systems NVR anywhere you want to. With a one hundred foot day and night range and motion-activated cameras, this system follows Zosi’s credo to the letter.

Able to record up to eight channels at the same time, the Zosi will also send real-time footage to any device that you want to, anytime that you want it to.

Your security is all that matters to Zosi and their PoE camera system is designed to make you feel secure, and completely at ease all day and every night. 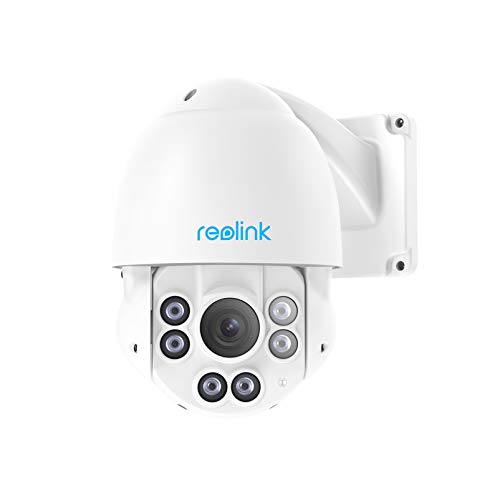 And the final choice on our list takes us back to the beginning, as it’s another Reolink PoE camera.

A slightly different way to record and monitor the individuals who access and enter your property, the long-range, motion-activated PoE camera is easy to install and will help to keep you and your family secure.

This Reolink camera is activated by movement and tracks, traces and records it on to the SD card that’s supplied with it.

And when you want to view the footage, you just take the card out, plug it into your PC or smart device, and watch everything that the Reolink PoE camera has recorded.

It’s also programmed to wipe its SD card when it’s full, and start recording footage to it all over again, so you’ll never run out of available recording space.

With an effective range of one hundred and ninety feet, the Reolink PTZ won’t miss a thing and nothing will escape its all-seeing eye. Once it’s got someone in its sights, the next place they’ll end up is stored on its SD card..

What Is A PoE Security Camera?

A PoE, or power over ethernet, camera is a security camera that is powered by an ethernet cable and uses the same cable(s) to transmit its footage to a recording device, which is usually an NVR (network video recorder).

Easy to install, due to the fact that they draw their power from the device they’re connected to rather than having to be hardwired into a property’s electrical supply, PoE security cameras are usually activated by motion and movement within their recording range.

Able to film during both day and night,  and stream whatever they film in real-time as well as recording it, they are an increasingly popular option in the home security market.

Which PoE Security Camera Is Right For Me?

Ideally, the PoE security camera system that you should install in your home or small business should have as many features and options as possible, and be able to record on as many channels (or cameras) at the same time as it possibly can.

It should also be able to stream any footage that it films, in real-time, directly to any and all of your smart devices.

It sounds like a lot, but most PoE security systems should be able to do all of those things, and as you’ll want to get the maximum amount of security protection and performance for your buck, you’ll want to make sure that the system you install has all of the aforementioned features.

That’s why we’d always recommend the Reolink RLK8, as it’ll do all the things that you need, and want, a PoE security camera and system to do at an incredibly affordable price.

It’s the PoE security camera system that we use, and while we wouldn’t normally argue with the conventional wisdom that states that you can’t put a price on security, this time we’re forced to disagree with convention.

You can put a price on security, and that price is as much as the Reolink RLK8 costs.